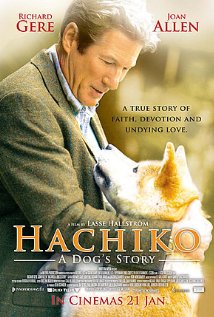 I love movies. I would watch movies everyday, all day, if I could. The range of movies I like is pretty wide – scary movies to animated movies. Although I watch all types of movies, I tend to hum and haw when it comes to romantic movies because it is depressing and reminds me that I’m alone and will probably never have a “happily ever after” like most romantic movies do. But I still watch them so I can dream of that life even if they leave me feeling alone and sad.

But when it comes to sad movies, I like them but then I don’t. Right now there are three movies so far that have made me cry uncontrollably.

Last night my mom and I watched a Netflix Instant Play movie called Hachi: A Dog’s Tale. The movie is in the category of Children and Family starring Richard Gere. I haven’t cried like this in many years. All I could think about was my own dog Sadie doing that and it broke my heart. My mom was walking down the stairs to her living area and I wrapped my arms around Sadie and said something to her (that I can’t say here otherwise I will spoil the movie), but it made my mom start crying again. The only way I was able to stop crying was to continue reading my book like I do every night when I crawl into bed. Sounds pathetic I know, but as awesome as this movie was, it was equally sad. If you’re a dog lover I still recommend this movie but highly suggest having tissues available. If you don’t cry then definitely see this movie because it was sooooo good.

A schoolboy reports on his hero: Hachiko, his grandfather’s dog. In a flashback, a puppy at a Japanese monastery is crated and sent to the US. The crate’s tag tears, and when the puppy pushes his way out of the crate at the train station of a small Rhode Island town, Parker Wilson, a professor of music in nearby Providence, takes the dog home for the night. His wife isn’t happy about it, but after failing to find the owner, she lets the dog stay. A Japanese friend reads the dog’s tag – “Hachiko” or “Eight,” a lucky number. Parker can’t teach the dog to fetch, but the friend explains that the dog will forge a different kind of loyalty. Tragedy tests that loyalty.

Oh my gosh….then we have The Notebook. When I watched this movie, it was around the same time that my mom and I suspected my grandma might have Alzheimers. So when the end of this movie approached and unraveled, let me just tell you that the waterworks took over. My mom and I watched it together and we couldn’t stop crying even after the credits finished. We were both a mess. But this movie in my opinion is one of the best love stories I’ve ever seen.

The movie focuses on an old man reading a story to an old woman in a nursing home. The story he reads follows two young lovers named Allie Hamilton and Noah Calhoun, who meet one evening at a carnival. But they are separated by Allie’s parents who dissaprove of Noah’s unwealthy family, and move Allie away. After waiting for Noah to write her for several years, Allie meets and gets engaged to a handsome young soldier named Lon. Allie, then, with her love for Noah still alive, stops by Noah’s 200-year-old home that he restored for her, “to see if he’s okay”. It is evident that they still have feelings for each other, and Allie has to choose between her fiancé and her first love. 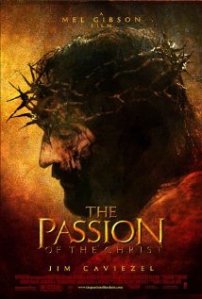 The final movie for now is Passion of the Christ. I went to see it years and years ago with some girlfriends at a movie theater. Not sure why we thought that was a good idea. When the really horrible torture parts appeared, I remember looking up at the ceiling of the theater and crying. I was trying to keep my chest convulsions to a minimum since I was with friends AND in a public place. I won’t see this movie EVER again, but I’m glad I saw it once.

A depiction of the last twelve hours in the life of Jesus of Nazareth, on the day of his crucifixion in Jerusalem. The story opens in the Garden of Olives where Jesus has gone to pray after the Last Supper. Betrayed by Judas Iscariot, the controversial Jesus–who has performed ‘miracles’ and has publicly announced that he is ‘the Son of God’–is arrested and taken back within the city walls of Jerusalem. There, the leaders of the Pharisees confront him with accusations of blasphemy; subsequently, his trial results with the leaders condemning him to his death. Jesus is brought before Pontius Pilate, the Roman Governor of Palestine, for his sentencing. Pilate listens to the accusations leveled at Jesus by the Pharisees. Realizing that his own decision will cause him to become embroiled in a political conflict, Pilate defers to King Herod in deciding the matter of how to persecute Jesus…