When you hear the word “budget” people cringe or run for the hills but setting a budget doesn’t have to be a bad thing. In fact, I have used a budget for many years and it’s helped me pay off my credit card debt and build a savings. I’ve even helped my mom pay off about six credit cards in a little over a year. So it works!

Then I bought a house. No savings now.

But I’ve been building it back for the last year by using this budget sheet that I created years ago. It’s broken down by paycheck and bill due date so you indicate which bill you will pay using which paycheck. Above each pay period, you enter in the amount of your paycheck. The money going out is totaled at the bottom while you can see how much you have left over for the pay period. Here is a screenshot of what mine looks like (minus the bill amounts…that’s private!) 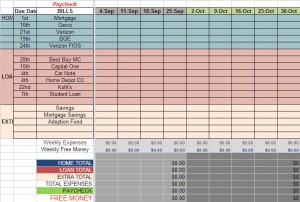 Using this spreadsheet has helped me figure out how much I can put into savings and helps me forecast what I might be able to save in a year or two, or a month or six months.

Most of us use some kind of budget whether it’s written out like what I do or it’s all done on paper or in your head, but if anyone is interested in trying my budget sheet out, let me know and I’ll email it to you.

I’m also changing how I work my savings. In the past I would pay my bills and then move over any left over money into my savings or the adoption account the day before the next payday. But I think I’ve been doing that all wrong. I am going to move over the adoption saving and then whatever I have left I will live on.

Let’s see if that works out better!