I just had to wait

I’ve been waiting for a couple of weeks to write again because I was worried things might go south. And I realize there is always a possibility for that to happen but I’m feeling pretty good today so I want to share with ya’ll.

Feb 16th – First u/s. Scared out of my mind. I sat on the table and waited for the tech and Dr. to come in. They come in and told them I was nervous to see an empty sac again. I told them I would be watching them instead of the monitor and to let me know if I can look. But while I was looking at them, out of normal reflex, I glanced over at the monitor and saw a tiny little baby. Heartbeat 130. 6w5d

Mar 3rd – Second u/s. Not as scared but still worried that the heartbeat stopped or something else happened. This appt was with my actual Dr. Didn’t hesitate to look at the monitor this time and I saw a bigger sac and a bigger baby. Looks like a gummy bear. Heartbeat 172. 8w6d 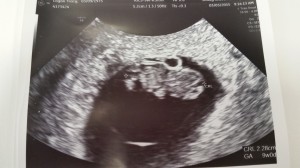 I’m feeling pretty awesome and relieved but still not out of the woods. But I think considering things have gone this far and that I’ve had to push my car out of being stuck in the snow, shoveling, and other strenuous tasks, I think this baby is nice and strong.

Symptoms: I’ve had two bad weeks of nausea. Not going to lie. As much as I wanted to be pregnant, I really didn’t want this. I don’t mind it when I’m home and can lie down when needed or puke in my own bathroom, but to have to hold it back while at work is getting really tough. But I’m trying not to complain. I finally told my manager and he is being super supportive and said if I need to work from home, just to let him know. But I also told him I’m trying not to be that person, but that it’s nice to know I can if I have a really bad day. I’ve had tender breasts but nothing like a couple of weeks ago. Or if my dog pushes off of me, then I notice them. Sleeping has been great so far. My main thing has been nausea.

My mom’s cute. She asked me when we can be excited. I told her that we can be but that until I announce it to the masses, to remain cautious. She agreed.

Next steps: I graduated from Shady Grove Fertility Center today and I have my first appt with my OB scheduled for March 17th (two more weeks). I was told that I might not get another u/s so I shouldn’t be surprised if I don’t.

8 thoughts on “I just had to wait”